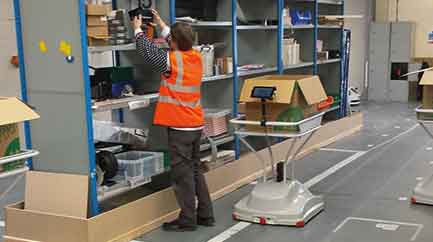 Many future industries will require autonomous, intelligent, mobile robots in human populated environments including robots carrying packages in warehouses and autonomous vehicles on the roads. Recent collaborative research at the University of Birmingham developed new ways to control the behaviour of robots using models of the space, time and dynamics of the environments.

This research developed new models for representing the environment both qualitatively and probabilistically, using machine learning approaches to predict the future dynamics of execution environments, and algorithms to plan the behaviour of one or more robots.

Challenges around the use and integration of robots in the workplace include the high costs and concessions needed to adapt the workplace. However pioneering research at the University of Birmingham in collaboration with industry partner Guidance Automation helped develop prototype robots that are cheap and simple and can be easily integrated into existing warehouse environments.

Algorithms were developed for optimising the routes of robotic vehicles in a warehouse as part of a TSB Smart project. This work planned the movements of robots in time and space to ensure high throughput of a live warehouse environment, currently populated with human staff. The overall system utilised Guidance Automation robots and infrastructure, and integrated algorithms developed at the Intelligent Robotics Laboratory in the School of Computer Science.

The system was deployed in the warehouse at Gompels, a customer of Guidance Automation that required a team of robots working alongside the human staff.

The robots do not look like typical science fiction robots with arms and faces, appearing more like a shopping trolley. And indeed this is how they behave, following barcode stickers on the floor to find the item required, and once found, a nearby human will place the item into the robot’s basket. The robot can scan its path to avoid obstacles, such as humans.

By integrating an automated robotic system into the warehouse, an improvement in the efficiency of the human pickers can be realised. It takes very little time for a human walking by to drop items into the robot’s basket, but the overall impact is to make the warehouse incrementally more productive. Of course, for businesses, using robots that work within the existing environment means lower cost implications.

Work is now taking place to make robotic solutions like these more cost effective for customers by optimising the cost of robots vs their impact, and Guidance Automation are exploring opportunities to scale this initial deployment to multiple customers, multiple sites and multiple robots at a single site. There is also the potential for this software to be sold or applied in other systems in the future, and Guidance Automation are currently developing applications globally.