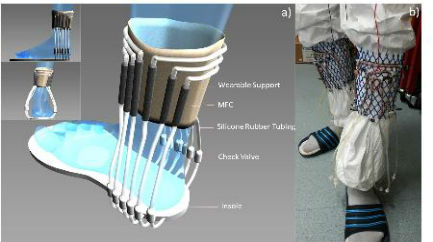 Capturing the energy expended as we walk has long been an aim of researchers, but many attempts fall into the same trap the humble bicycle dynamo falls into, that by making the process harder, it’s likely to involve the user expending more energy than they get back.

A team from the University of the West of England (UWE Bristol) are taking a novel approach to the challenge by embedding a system of fuel cells inside a pair of socks that generate power as we move about.  The wearer should beware however, for the microbial fuel cells are powered by urine!

The project, which was documented in a recently published paper, was led by Professor Ioannis Ieropoulos from Bristol BioEnergy Centre.

The fuel cells were embedded in a pair of socks, whereby they were supplied with urine that was circulated as the wearer walked about.  Traditionally, these kind of continuous flow fuel cells would need a mains powered pump to circulate the urine over the fuel cells, but the human activity provided a more than adequate substitute.

The pump inside the socks was based on the circulatory system in fishes, and the act of walking prompted the urine to pass over the fuel cells and therefore generate energy.  Soft tubes that were located under the heels of the socks ensured there was a constant movement of fluid, with the resultant energy enough to send a message wirelessly to a computer every two minutes.

Professor Ieropoulos says, “Having already powered a mobile phone with MFCs using urine as fuel, we wanted to see if we could replicate this success in wearable technology. We also wanted the system to be entirely self-sufficient, running only on human power – using urine as fuel and the action of the foot as the pump.”

“This work opens up possibilities of using waste for powering portable and wearable electronics. For example, recent research shows it should be possible to develop a system based on wearable MFC technology to transmit a person’s coordinates in an emergency situation. At the same time this would indicate proof of life since the device will only work if the operator’s urine fuels the MFCs.”

The concept of urine powered devices may seem somewhat unpleasant, but there have already been examples of it working in practice.  The Centre has recently launched a prototype urinal in partnership with Oxfam that uses pee-power technology to light cubicles in refugee camps.

The process is valuable as it taps into the plentiful energy available in waste fluids and converts that directly into electricity.  It can use any form of organic waste and turn it into energy without having to rely on fossil fuels, thus making it a sustainable option once you overcome the eww factor.