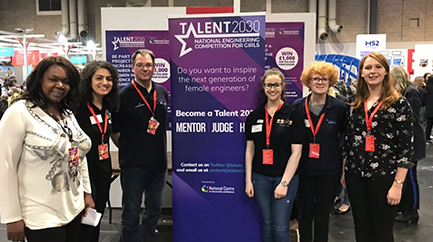 As The Big Bang Fair closes its door for another year, finalists of the Talent 2030 National Engineering Competition for Girls look forward to exclusive behind-the-scenes tours at Rolls-Royce and PepsiCo.

I recently blogged about the winners of our Talent 2030 competition – part of an ambitious project the National Centre for Universities and Business (NCUB) set up in 2012 to encourage young women to study engineering-related subjects. This month we had the pleasure of inviting the 80 shortlisted finalists, their teachers and friends to the Big Bang Fair in Birmingham – the largest celebration of STEM (Science, Technology, Engineering and Maths) for young people in the UK. Each Talent 2030 competition entrant had their own stand to decorate to exhibit their ideas on how to solve a 21st century problem using engineering and technology.

At the awards ceremony, the 1st, 2nd and 3rd place girls were called on stage to receive their certificates, prize money and tell the audience a little about their inventive ideas. We gave out £4500 in prize money this year, including a £150 on-the-day prize for best exhibition. Judged by a delegation from competition sponsor PepsiCo and members of our Talent 2030 judging panel of leading female engineers, the prize went to Ava, Grace, Anna and Freya from Felsted Prep School in Essex for their Sanitary Shark project which tackles the growing problem of plastic pollution in the oceans. The girls took a closer look at the impact of sanitary products – did you know, for example, that a single sanitary towel can contain the same amount of plastic as four plastic bags? The team of four has since gone on to be interviewed by the BBC Essex radio drivetime show to raise awareness about plastic pollution and to discuss their project.

It is great to see continued interest in the girls’ engineering ideas. We were also delighted to hear that Sibford School’s Year 11 student Charlotte was approached by a major hospital’s head of paediatric medicine who is interested in taking her project into design development. For her entry, Charlotte wrote extensive code for a robot that uses tablets to provide access to teachers and teaching materials for young people while they undergo hospital treatment.

Once again, we would like to thank everyone who took part in the competition and hope that the 2018/2019 Talent 2030 National Engineering Competition for Girls has encouraged more female students to consider careers in engineering, manufacturing and technology. We look forward to accompanying the winners to an exclusive behind-the-scenes tour at Rolls-Royce, and exploring the Walker’s crisp factory at PepsiCo with the finalists.