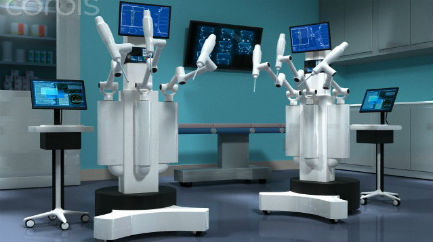 Recent times have seen a number of projects to try and make the surgical process more effective, whether it’s using augmented reality to help train surgeons, the use of 3D virtual organs for practising on, or even the use of robots to perform surgery.

It is on this latter point that researchers from Oxford University have recently entered into a partnership with the Dutch robotics company Preceyes to test a new robotic surgical system.

The team, which will be led by eye surgeon and researcher Professor Robert MacLaren, will conduct a number of human clinical trials using the PRECEYES Surgical System.  The study will aim to assess the clinical functionality of the device, especially in high precision vitreoretinal surgery, which are difficult operations that are conducted at the back of the eye.

The move is further evidence of the links between Oxford and Preceyes, as they have also signed a deal with the spin-out company Nightstar, to further develop high-precision drug delivery technology in the eye.

The Preceyes robotic technology targets ocular surgery, with vitreoretinal surgical procedures as the initial target market. The technology promises to improve the delivery of existing ocular surgery as well as enables the development of new treatments such as high-precision drug delivery, assisting eye surgeons in performing the most demanding surgical tasks.

Robert MacLaren, Professor of Ophthalmology at the University of Oxford commented: ‘“Over the last century, devices that enhance surgical precision have given us the greatest breakthroughs in ophthalmology. We are delighted to have approval for a clinical trial in Oxford which will be the first to assess use of a robotic device for surgery inside the eye.’