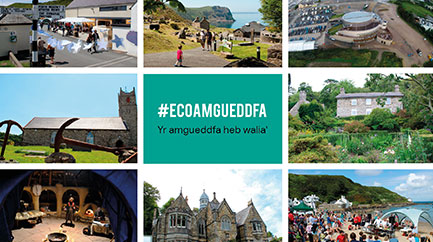 In April 2014 Dr Einir Young and the Sustainability Lab at Bangor University were approached by a partnership of seven heritage sites on the Llyn Peninsula to establish the first ever ecomuseum in Wales and, to our knowledge, the first fully digital ecomuseum in the world. Innovate UK / Welsh Government KTP funding was secured to develop the concept.

Driven by sense of place, the people and the culture of the Llŷn Peninsula, the main aim of the initiative is to support the region’s tourism business, through the shoulder season, delivering a conservatively estimated revenue increase of £2million to the economy through cultural tourism.

The ecomuseum concept is closely based on the philosophy and practices of the ‘ecomusee’ movement, found mainly in France, Italy and the Scandnavian countries, was adopted. (An ecomusee celebrates the identity of a place, focusses on local participation and aims to enhance the well-being and sustainable development of local communities). The motivation is to ensure the durability of the of the Llŷn Peninsula and its ability to maintain its own ‘production capability’ – not to satisfy an external sustainability agenda.

A comprehensive marketing package has been developed using multiple social media platforms and their associated apps and websites targeting the Welsh, European and global markets. The website also hosts video links and oral histories. In the relatively short time, since establishing the initiative, the global audience for communications from the #Ecoamgueddfa has reached upwards of 150,000 across 60 countries.

Underpinning the outstanding results have been a combination of training packages for the partners, their volunteers and guides (some 25 training sessions delivered to 120 partner staff and volunteers), alongside the development of a brand that has been rolled out across social media. An accompanying calendar of events has been developed for the sites and for the wider tourism sector on the Llŷn Peninsula leading to an inaugural #Ecoamgueddfa Festival held in June 2015.

With the #Ecoamgueddfa concept gaining traction, partners report that their collaborative working is stronger than ever, enabling them to collectively seek funding for other activities and initiatives. The relationship, research and development collaboration with Bangor University continues and a number of groups, nationally and internationally, have approached the partnership for guidance, advice and to share good practice in seeking to establish similar initiatives.

In recognition of its success and impact, the #Ecoamgueddfa project was deemed winner of the ‘Best Cultural & Societal Impact’ category in Bangor University’s 2015 ‘Impact and Innovation Awards’.