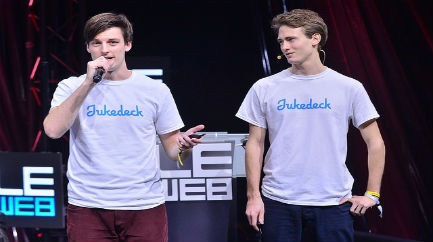 Jukedeck, the London-based tech startup which has built software that composes music using artificial intelligence, has launched its first product.

Jukedeck MAKE is a site for video creators to make unique, tailored music for their videos. The company has also closed a £2M round of funding, led by Cambridge Innovation Capital.

Founded by Ed Rex, a Cambridge University music graduate and published composer, Jukedeck operated under the radar for its first couple of years as Rex set about learning to code and building the basis of an algorithm that generates the music.  Patrick Stobbs, a classmate from Cambridge, joined and they raised a seed round of funding in July 2014, built a team of experts in machine learning, music composition and audio production, and are now ready to launch their first product.

Jukedeck MAKE is a tool that lets video creators make the music they want in an instant. Users can come to the site, choose a style of music, and are presented with a completely unique soundtrack. They can even choose how long the track is, so that it’s just the right length for their video – and there are more features coming soon that are going to make it easier than ever to get the perfect soundtrack.

The future of music?

“If you’re making a video, the process of sourcing and editing music is broken,” says Rex. “Searching through stock audio libraries takes hours, it’s expensive and the copyright and royalty restrictions are confusing. Our goal is to fix that. We want to give video creators a tool that lets them make the music they want in an instant. We want to make getting the right music as quick and as easy as possible.”

Their target is the large and growing online video market, dominated by YouTube but also including broadcasters and new platforms such as Instagram and Twitch. “The video industry is growing rapidly, and it needs a lot of music”, says Stobbs. “Our technology allows every creator to make unique soundtracks – and they’re all completely royalty-free”.

Current users include Google Developers and The Natural History Museum, and videos using their music have generated over 16 million views on YouTube. With free music available to early sign-ups, they hope that the customer base will grow quickly.

Alongside the product launch, Jukedeck are announcing a new £2M round of venture-capital funding, led by existing investor Cambridge Innovation Capital, with participation by Backed VC and Playfair Capital. As part of the round, Chris Smart (formerly a Director of Shazam Entertainment) joins the Board.

Launching this week is especially exciting for Jukedeck as 10th December 2015 is the 200th birthday of Ada Lovelace, who predicted in 1843 that one day a computer program would be able to write music. Her visionary approach to the possibilities of programming has driven Jukedeck to make her prediction a reality and launch it to the world in time for the 200th anniversary of her birth.

Widely regarded as the first computer programmer for her work with Charles Babbage on the designs for his Analytical Engine, Ada designed the first algorithm intended to be carried out by a machine. In her notes on the Analytical Engine, she postulated that it one day “might compose elaborate and scientific pieces of music of any degree of complexity or extent…”.

The idea of a computer being able to compose music is therefore not new. And the possibilities have been talked about in the modern tech world for a while -Sean Lennon said of Sean Parker (in a 2010 Vanity Fair article): “He’s always talking about the potential of computers to generate algorithms for likeable melodies, and we have this ongoing argument; he believes it’s only a matter of time before computers will be able to create listenable tunes.” However, most of the attempts so far have been small-scale.

But, by using artificial intelligence to understand how to write music, chord by chord and note by note, Jukedeck has built a system that can create unique and usable music at the touch of button. We are proud to have reached this milestone in time for Ada Lovelace’s 200th birthday and are excited about the future possibilities for this technology.