Putting the UK at the forefront of wireless communications 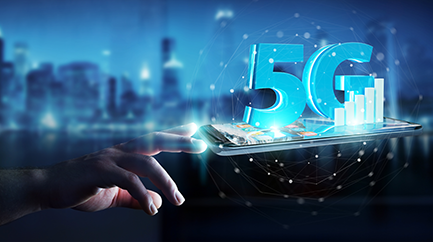 A new research project aims to put the UK at the forefront of the next generation of millimetre wave wireless communications technology.

The DLINK project, which is a collaboration between Lancaster University and Glasgow University along with major industrial partners and advisors including BT, Nokia Bell Labs, IQE, Filtronic, Optocap and Teledyne e2v, and has Intel on its advisory board, aims to provide ‘fibre-in-air’ communication links with unprecedented data rate and transmission distance by exploiting a thus-far unused portion of the wireless communications spectrum, called D-band.

D-Band, which is the portion of spectrum between 151-174.8 GHz, is particularly relevant for 5G because, being very wide, it enables the wireless transmission of high data rates – of around 45Gb/s.

The breakthrough goal of DLINK is to enable data transmission over distances of one kilometre, by a novel transmitter with excellent ability to withstand the high attenuation from rain and other atmospheric conditions that can be problematic at that portion of the spectrum.

There is an urgent need for new wireless communications technologies capable of delivering data at high speeds and low cost and without needing installations of fibre or large unsightly equipment to be fitted on the tops of many of the buildings in our cities.

This is because wireless data demands are continuing to gather pace with widespread proliferation of Internet connected devices such as smartphones, tablet computers and laptops. The things people choose to do with their devices is also increasingly demanding – around 74 per cent of mobile data traffic will come from video streaming within five years.

All of these connected devices are placing huge strains on the existing wireless communications systems, and its limited data capacity.

DLINK has been funded with more than £850,000 from the Engineering and Physical Sciences Research Council. The research group at Lancaster will build novel powerful ‘vacuum travelling wave tubes’ – a device that greatly amplifies the transmission power needed to enable new mesh architectures of wireless high data rate networks at the very high frequency of the spectrum.

The traveling wave tube will provide transmission power to work in conjunction with a novel oscillator to produce high data rate. The oscillator will be built by a team at University of Glasgow, led by Professor Edward Wasige.

DLINK is being led by Professor Claudio Paoloni, Cockcroft Chair and Head of Engineering at Lancaster University. He is a world leading scientist in the field of millimetre wave travelling wave tubes and has coordinated multi million pound projects for novel wireless network architectures in different portions of the wireless spectrum – from 90 GHz up 300 GHz.

He said: “The huge growth of mobile data and consumer demand for video streaming, along with the Internet of Things, driverless vehicles, virtual reality and a multitude of other emerging technologies are going to require fibre-quality data speeds but delivered wirelessly and ubiquitously.

“The DLINK project has the ambition to deliver new wireless technologies that will enable us to exploit the as-yet unused D-band part of the spectrum, and position the UK as a major player in achieving a beyond 5G connected future.”