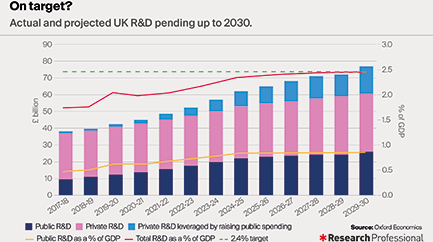 The government’s R&D Roadmap, published in July, was a strong signal of support to the research and innovation community. It showed an ambition to make the UK economy more R&D-intensive, and recommitted to an ambitious target to invest the equivalent of 2.4 per cent of GDP in R&D by 2027, and 3 per cent in the longer term.

As pressure on public finances increases, the 2.4 per cent target must not lose support and momentum. If we don’t invest in R&D now we risk slipping further behind other countries and won’t be well placed to deliver the innovations needed to recover from the current health, social and economic crisis.

The government’s plan to meet the target includes a big increase in public R&D expenditure to £22 billion per year by 2024-25, up from £9.8bn in 2017-18. But the benefits of this will not be realised unless greater public spending also leads to greater private investment in R&D.

An analysis for the National Centre for Universities and Business by Oxford Economics, published on 2 October, estimates that to achieve the 2.4 per cent target the private sector will have to spend £17.4 billion more on R&D in 2027 than it did in 2017. This is a big ask, particularly as businesses square up to the consequences of Covid-19.

The same analysis suggests that government R&D spending of £22 billion per year would lead to a £9 billion annual increase in private R&D budgets. If that’s the case, then the combined effect of the promised increased public funding and boost to private investment should put the UK on course to achieve the 2.4 per cent target—although not by 2027. But it won’t be easy.

UK firms alone are unlikely to spend £17.4bn more on R&D. Therefore, attracting investment from foreign multinationals will be key. The UK already performs well on this score. In 2018, foreign-owned companies accounted for 53 per cent of business-based R&D—up from 40 per cent in 2007 and 27 per cent in 1993.

The crucial question, then, is: what makes the UK an attractive place to invest and how can we increase R&D spending?

The impact of Covid-19 on foreign direct investment in R&D is not well understood. If it causes foreign-owned firms to divest from the UK, this would do severe damage both to the country’s current research and innovation performance and its ability to realise its long-term ambitions.

But the crisis is an opportunity as well as a threat. Research and technology are in the forefront of the UK’s response to Covid-19, presenting a chance to showcase strengths in R&D and innovation, and promote the country as an attractive place to invest.

The government has yet to reveal how it intends to spend the promised £22bn—we don’t know, for example, whether the UK will associate to the EU’s Horizon Europe programme, or launch a replacement. However the money is spent, it will be a critical part of efforts to create a more research-intensive economy. Along with encouraging businesses to invest in R&D and innovation, a strong, long-term public commitment to research spending is our way out of the crisis and into a prosperous future.